Mocktails are a great way to enjoy the flavors of your favorite cocktail without running the risk of a hangover the next morning. A mocktail is also perfect for anyone who’s given up alcohol for whatever reason. You may also be the designated driver for the evening, but don’t want to drink water the whole night. Whatever your reason, there’s a mocktail that you’ll love.

We’ve already looked at a few of our favorite non-alcoholic drinks modeled after classic cocktails. Today, we’re taking a look at some quintessential summer cocktails. Have you tried any of these recipes? If so, which was your favorite? We want to know! Email us at living@medicareful.com with your favorite from the article.

A mojito is a Cuban classic that uses the refreshing taste of mint and lime to cool you off on a hot day. Perhaps falsely labeled one of Ernest Hemingway’s favorite drinks, as well as one of the most popular cocktails in the world, the mojito is a flexible drink that can handle different flavors like honey or fresh ginger. The mix itself has origins back to Sir Francis Drake, whose sailors learned the cocktail from native Cubans to combat dysentery and scurvy.

Traditionally, a mojito mixes a white rum, lime juice, sugar or simple syrup, and mint leaves, muddled in a high ball glass. The relatively low alcohol content makes this cocktail particularly easy to replicate as a mocktail. Tonic water can mimic the flavor of alcohol while the lemon-lime soda boosts the natural lime flavors of the drink. A lime seltzer is a good alternative, too. 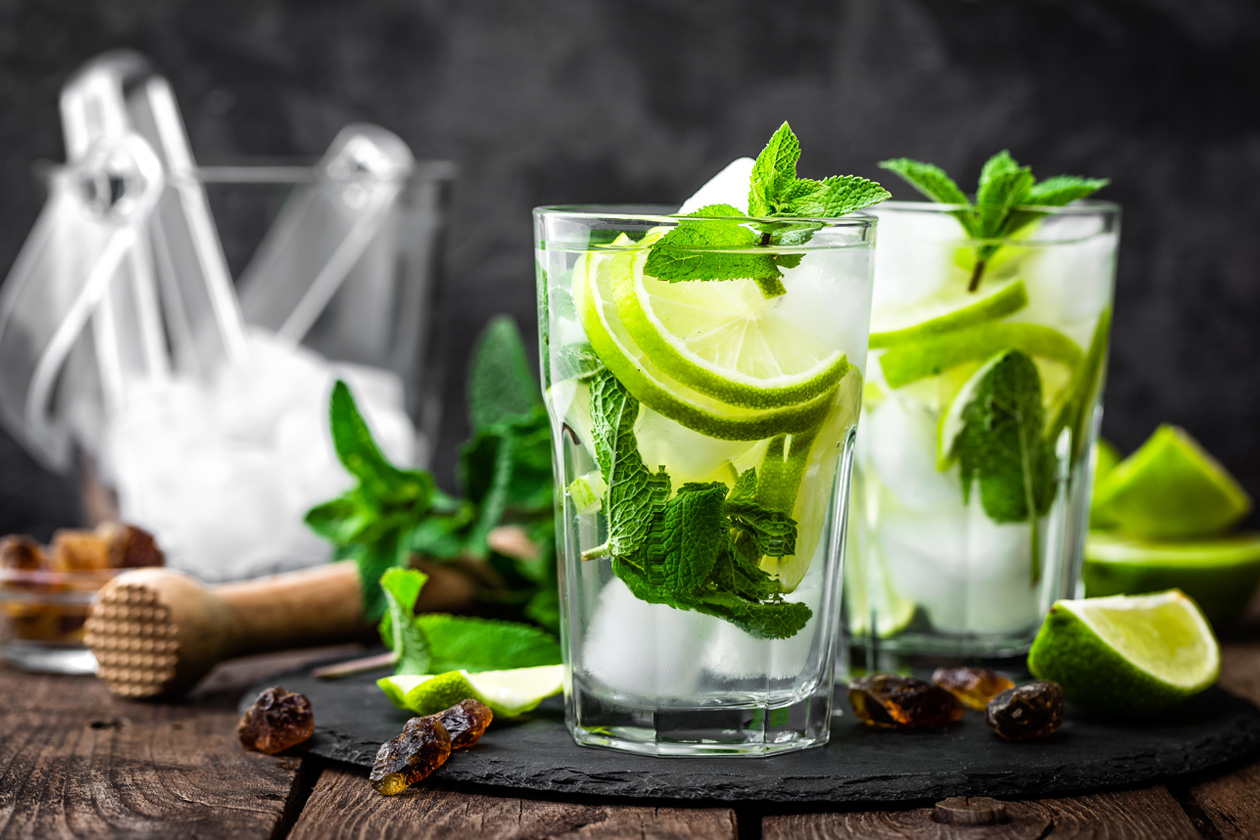 Have you ever been at a bar and seen customers walking around with a fancy-looking copper cup? That is the spicy cocktail known as the Moscow Mule. This cocktail was created in the 1940s at the Cock ‘n’ Bull in Los Angeles as a way to move vodka, which was unpopular in the U.S. at the time, and ginger beer, which the bartender had too much of. And the drink’s signature copper cup? Bar owner Jack Morgan was dating the owner of a copper company at the time. Copper mugs are great for making cold drinks since copper gets colder quicker and stays that way longer.

The most important flavor in a Moscow Mule is the ginger beer. Since this is non-alcoholic, we’re in luck when it comes to making this mocktail. We’re also trading tonic water, which we use to mimic an alcoholic bite, for a club soda in this recipe, since the spice of the ginger beer takes center stage.

Summertime is a time for fruity, tropical drinks, and the king of tropical drinks is the mai tai. It was created by Trader Vic (Victor Bergeron) in 1944, who reportedly served it to some Tahitian friends. They enjoyed it so much they said, “Maita’I roa a’e,” which translates to “very good” or “out of this world.” The name stuck, and now this fruity rum drink can transport you to islands wherever you are.

The drink you’ll often find in modern bars follows the “run after leggy tall pretty models” recipe, which means rum, amaretto, lime, triple sec, pineapple, and Myers (an aged rum). Our recipe is closer to the Trader Vic original, which relied less on sugary liqueurs. Instead, it leaned on natural fruit juices for flavor. You’ll also add some simple syrup and orgeat syrup for sweetness and almond flavor that modern mai tais typically get from amaretto. Finally, you can top off the drink with club soda if you want to mimic an alcoholic bite.