At Medicareful Living, we believe everybody should have at least one good showstopping dish. It’s that recipe you can bring out for dinner parties or to prove to your friends, “Hey, I can cook, too!” Trying a new dish is also a great excuse to test and expand your cooking skills. The more recipes you have to choose from, the better home chef you’ll be. That’s partly why we created this series — “Dishes to Impress Your Friends.”

In our Homemade Lobster Ravioli post, we discussed how to do everything from making fresh ravioli pasta to creating a pesto to steaming your own lobster tails. Today, we’ve got a less-work-intensive, but by no means easy-peasy, dish. In fact, this recipe for Jewish-style Artichokes, or as it’s known in Italy — Carciofi alla Giudia (car-CHO-fee al-la Joo-dee-uh), has beguiled people for years due to its complex simplicity!

Carciofi alla Giudia is one of the most famous Roman recipes. Rome, “The Eternal City,” has long been home to a vibrant Jewish community, located in the neighborhood known as the Jewish Ghetto. This beautiful, ancient section of an already-ancient city houses some of the best restaurants in the city, and Carciofi alla Giudia is a staple of their menus. In fact, this dish has been on Italians’ menus for a long time, with the recipe appearing around the 16th century (though it may have been around longer than that). Due to the poverty of the community, recipes were simple, but used what they had to maximize the flavors. Today, Rome’s Jewish Ghetto is a haven for food lovers, combining Jewish cooking from ancient Judea and Roman cuisine that’s been perfected for centuries.

This dish has been on Italians’ menus for a long time, with the recipe appearing around the 16th century (though it may have been around longer than that).

So, what exactly are Jewish-style artichokes? The simplest way to describe these is as deep-fried artichokes. What makes them so impressive is their preparation, which can be daunting, and flavor.

We’ll get into the prep and cooking later, but for now, let’s focus on the flavor. Imagine a really good chip. Now forget that, because Carciofi alla Giudia takes everything that’s good about potato chips and improves upon it. The leaves of the artichoke become crispy, but meaty and salty, with a rich, nutty flavor. Once you reach the artichoke heart, the outside remains crispy but tender.

Cooking the artichokes is the easy part. You’re deep-frying it twice. What makes this dish impressive to friends is preparation that’s involved in getting the artichokes ready to be eaten, specifically the spiny leaves.

Use Carciofi Romanesco (Roman artichokes) — the smaller, purple artichokes — if you can.

When shopping for artichokes, if you can find Carciofi Romanesco (Roman artichokes), buy those. These are the smaller, purple artichokes (not the large, sturdy green ones you can find in most grocery stores). You can use a regular green artichoke, but it will require a bit more cleaning. Roman artichokes are entirely edible and lack the spiny choke (the crown of pointy fibers that become the florets when the artichoke blooms) that other artichokes have. If you use regular artichokes, this means you’ll have to remove the spines from the chokes before eating them.

Whatever type of artichoke you’re using, when you’re ready to start preparing them, you’ll need to follow a few basic steps. 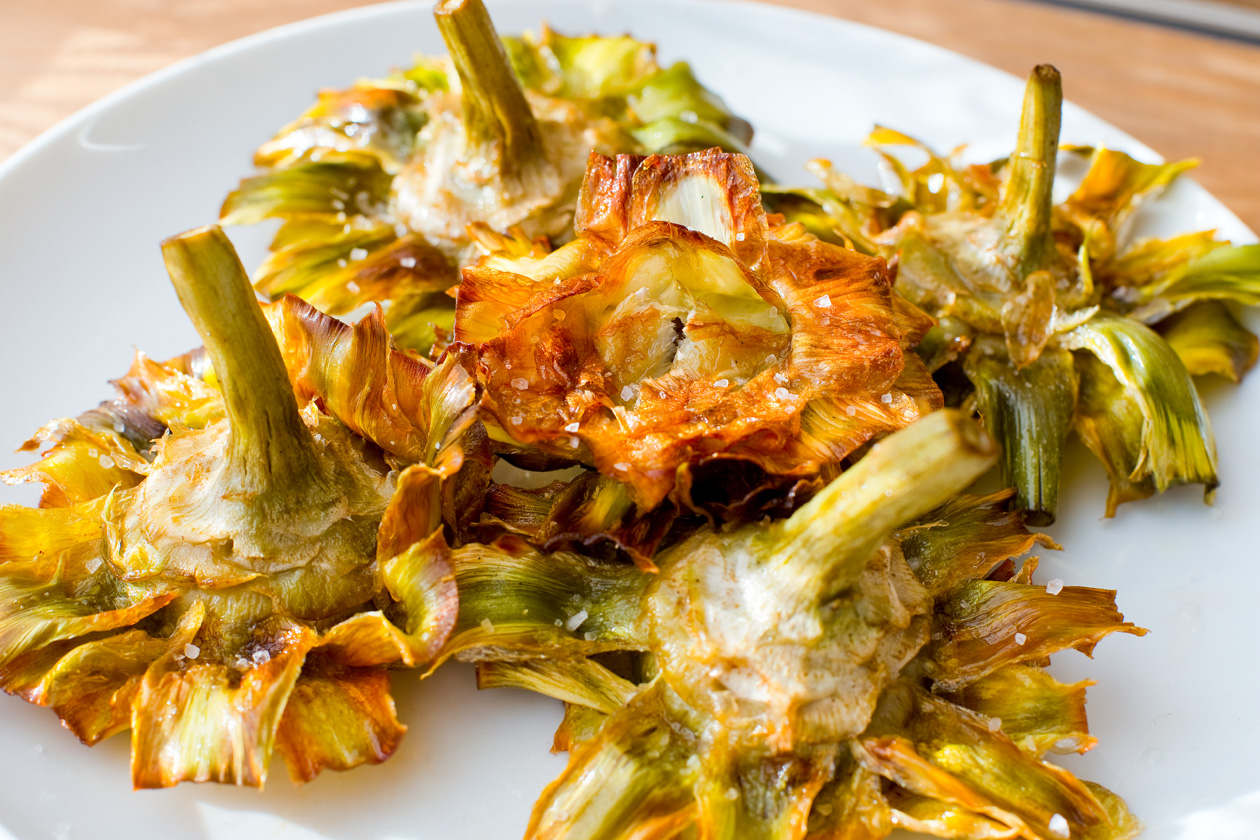