Are you looking to test yourself in the kitchen with a new recipe? How about one that you can show off to your friends and family when you’re hosting a dinner party or attending a potluck? Previously, we’ve written about how to make homemade lobster ravioli and Jewish-style fried artichokes. Today, we’re moving Northwest from Italy into the French countryside of Burgundy.

Coq au vin (pronounced like “coke oh vahn”) is a famous French dish that produces flavorful, moist chicken and is surprisingly simple to learn. What we love about coq au vin is that it’s a great lesson in building and layering flavors, as each ingredient plays into the overall flavor of the dish. So, if you’re ready to wow your friends and family while learning to become a better home chef, you’ll love this classic dish from the French countryside!

Coq au vin is an old dish. It’s so old, that the origin of this wine-braised chicken may be traced back to legends involving Julius Caesar. In truth, this dish may not be that old, but Oxford’s Diner’s Dictionary contends that it still is an age-old recipe that came to wider attention in the 20th century. One of the culinary champions that brought this dish to the tables and screens of Americans (and likely why you’ve heard of the dish) is none-other than Julia Child, who featured her recipe for the dish more than once.

Like many of the best dishes from French cuisine, coq au vin is a peasant dish, making use of what was available.

The beauty of coq au vin is that it’s a simple, unpretentious dish that’s relatively inexpensive to make. This may surprise some that have an image of French cuisine as involving tuxedoed waiters and starch-white table clothes. Like many of the best dishes from French cuisine, though, coq au vin is a peasant dish, which makes use of what ingredients they had available. In this case, coq au vin was developed as a way to make the very tough meat of an old rooster edible. One of the ways to cook tough meat without making it chewier than rubber is to braise it slowly at a low heat. Hence, the coq au vin was born!

The main ingredients of coq au vin are right in the dish’s name, which translates to rooster in wine. While this dish is traditionally made with a rooster, good luck finding one at your local grocery store or farmers market. Luckily, you can easily substitute a chicken breast without too much fuss. The biggest issue arises with what to do with the white meat. Unfortunately, the white meat of the breast, for example, would long dry out by the time the rest of the flavors of the coq au vin have properly developed. This is fairly easily troubleshooted. Separate the chicken (or buy it already separated) and marinate it all in your wine of choice overnight. When it comes time to braise the chicken, start with the dark meat and add the white meat in the last 30 minutes so that it doesn’t dry out.

The biggest tip we can give with the wine is to pick a red wine you like the taste of, since it’s such a key flavor.

The other main ingredient in this dish is the wine. Generally, you’ll be using a French red wine, often from the Burgundy region like pinot noir. The biggest tip we can give with the wine is to pick a red wine you like the taste of. While there’s plenty of other flavors in coq au vin, the red wine is a key component, so you should enjoy the taste! A few other common ingredients that coq au vin contains include lardons, which consist of diced pork belly (though bacon can be substituted) and chopped vegetables, like carrots (a common pick), mushrooms, pearl onions, and garlic. These will blend into the braise, rounding out the flavors.

The most important element of coq au vin isn’t an ingredient, it’s time. Making this dish takes a lot of patience. Not only are you marinating the chicken overnight, but you’re also braising it for over an hour. Most of the other steps are pretty simple. 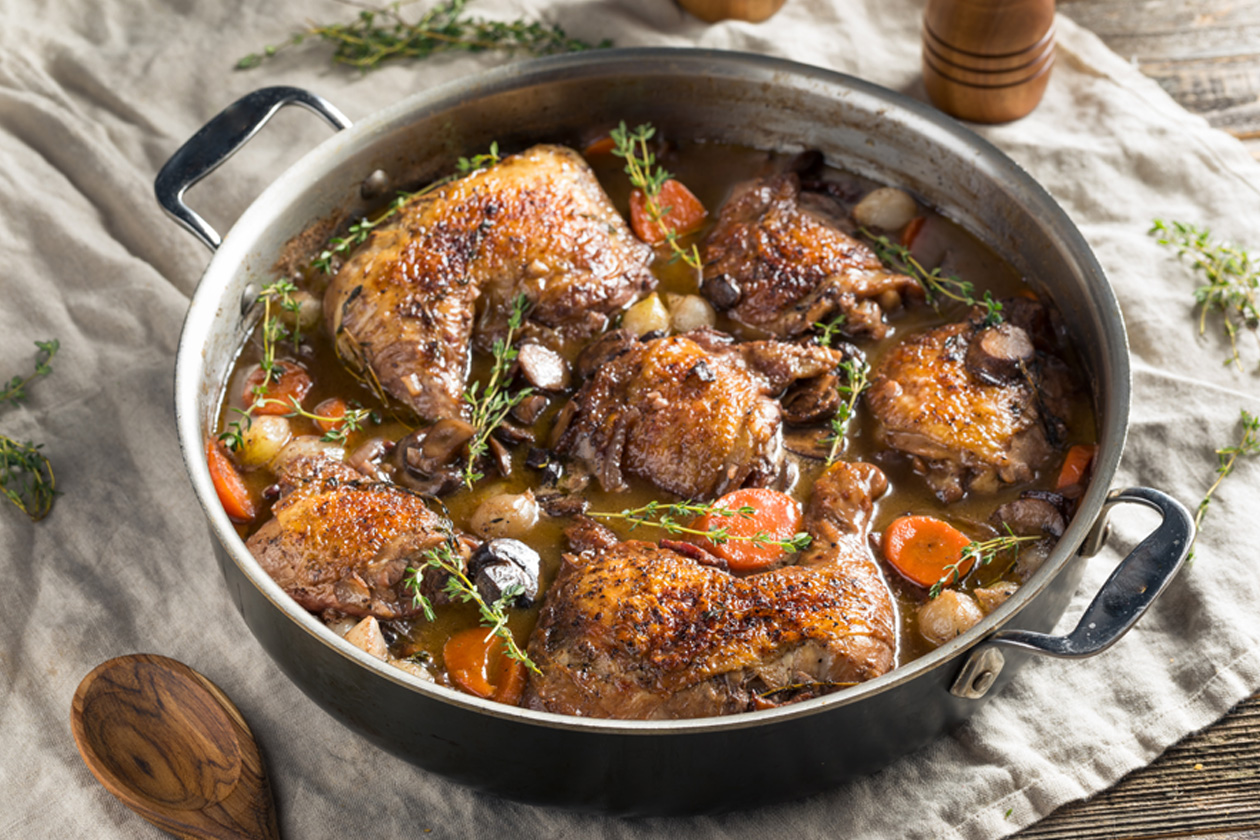 Using Basil in Your Cooking