French cuisine has a reputation for complex dishes that take a lot of skill to master and is epitomized by the style of haute cuisine that is often accompanied by high fashion and high prices. But, as we touched on with our recipe for coq au vin, a lot of the best French cooking isn’t nearly as scary as you may assume. In fact, you may be more familiar with it than you thought. For example, picture a meal of a perfectly seared steak topped with an herbed butter or creamy sauce beside a mountain of crispy shoestring-thin fries. What could be more American than that?

It may surprise you, but steak with fries is an incredibly popular dish in France, where it goes by another name steak frites (literally steak [and] fries in French). One reason for this popularity is the dish’s versatility. There’s no one way to make steak frites, with different regions of France giving the dish their own spin. There isn’t even a specific cut of meat that’s always used in the dish, like a porterhouse or tenderloin. That said, steak frites isn’t traditionally made with the expensive cuts of meat, like the two just named. Instead, you’d more often see cheaper cuts of steak like hanger or flank (though rump or coulotte is also commonly used now) that have been expertly prepared. You’ll most often find steak frites served rare — or saignant (bloody) in France — though you can order it more well done if you prefer.

Of course, the other important ingredient of steak frites is the frites, or french fries as we know them. Ironically, french fries may not even be French, but possibly Belgian in origin (though there is a fierce debate over this). The frites add an important counterpoint to this dish, giving the eater another texture and flavor. If you are making this dish for friends, you can just use store-bought fries, but if you really want to impress your dinner guests — as this series tries to do — you can make homemade fries. There are three steps basic steps to making homemade fries — cutting, soaking, and frying. Cutting and frying are pretty straightforward (which we’ll cover more in the recipe) but the soaking step may not be so clear. The reason you want to soak your fresh cut potato fries is because the soaking helps remove the starch, making the fries crispier. The longer you soak the fries, the crispier you’ll get them. It’s ideal to soak them overnight. Then, when it comes to frying, you can follow our tips on baking fries to make them a little healthier!

One thing that can really set a steak apart from other hunks of meat is the sauce, and if there’s one thing that the French have mastered, it’s a good sauce. To really take your steak frites to another level and make it feel like steak frites, you have to add a decadent, show-stopping sauce. Don’t get us wrong, Worcestershire and A1 sauce are very tasty, but if you’ve never had an herbed butter or a steak drizzled in a variety of Hollandaise sauce, you’re in for a real treat. In fact, if you’re planning on using a sauce with steak, a hollandaise or brown sauce (think a pan sauce) are some of the best ways to enrich the meat.

Don’t get us wrong, Worcestershire and A1 sauce are very tasty, but if you’ve never had an herbed butter or a steak drizzled in a variety of Hollandaise sauce, you’re in for a real treat.

While we’ve previously discussed how to make a pan sauce, we haven’t touched on Hollandaise, making this the perfect opportunity. Hollandaise sauce is one of the five French mother sauces that act as base categories for other sauces. Hollandaise is much like a mayonnaise in that it’s an emulsification of egg and a fat, only instead of oil (in mayo) you’re using butter as the fat. Hollandaise also includes lemon and a bit of salt, which help to cut some of the fattiness of the butter and the steak you’ll be pouring it on. Another type of sauce that pairs as well as Hollandaise (if not better according to some) is a bearnaise sauce. Very similar in ingredients to a Hollandaise sauce, a bearnaise sauce is an emulsification of butter and egg yolks but with the added factors of white wine vinegar, fresh tarragon, and, sometimes, shallots. It’s really delicious!

So, without further ado, here’s how you can make this exquisite meal to knock your guests’ socks off! 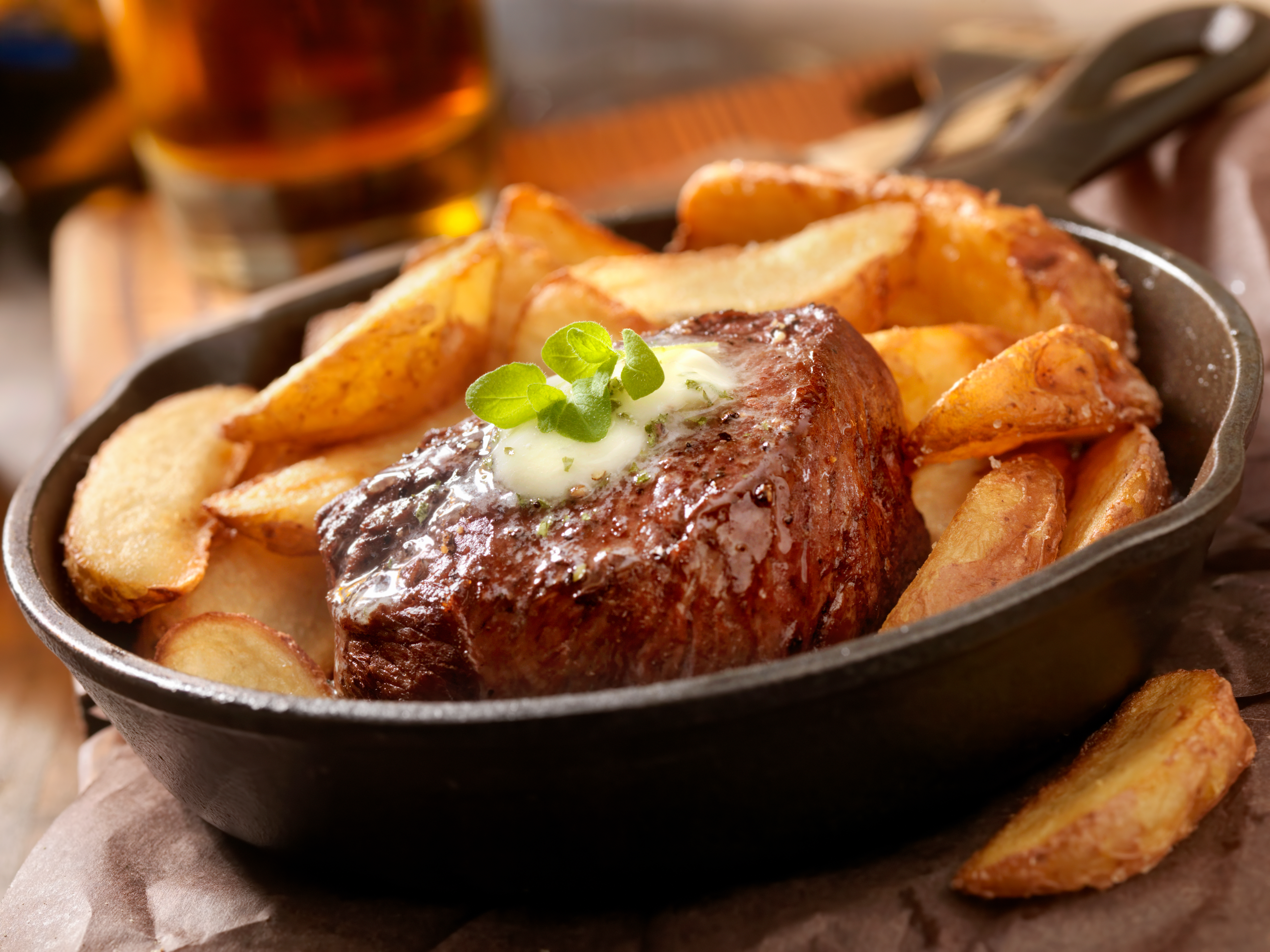 Note — There’s another trick you can use to make the sauce without a bain-marie is with an immersion or stick blender. Simply put the yolk mixture ingredients in a hard-plastic cup or mixing bowl and begin to blend them, moving the immersion blender up and down slowly. As you blend, pour in hot clarified butter and continue to blend. This should cause the same emulsification as the whisking. If the sauce stays too thin, you’ll likely need to create a bain-marie and whisk it that way to reheat everything.

Note — Instead of one big steak, you can buy the equivalent weight in smaller steaks and give everyone their own steak. The advantage of this is it allows everyone to have the steak cooked at a different doneness, though it’ll likely be more expensive and more work for you.

Quick and Easy Recipes for One

Is Magnesium Healthy for You?