If you’ve never had bangers and mash before, you should change that. It’s the definition of a comfort food. It’s filling and easy to make with inexpensive ingredients. For many, especially in Ireland and Great Britain, it’s a dish that harkens to childhood and a homemade meal from mum.

While this was perfection as children, things aren’t so simple for adults. We need to be more health conscious and aware that sausage, gravy, and buttery mashed potatoes aren’t going to be allies in the fight against the obesity epidemic. With some clever tweaks, we can make this classic meal healthier while keeping the spirit of the dish largely intact.

Use a Slimmer Sausage for a Better Banger

When it comes to making bangers and mash, the bangers deliver a lot of the flavor. Traditionally, British pork sausage is used. This is a milder sausage with breadcrumbs. They also tend to differ from American breakfast sausage in that bangers are more savory where breakfast sausages are sweeter. Pork tends to be high in saturated fat and calories (from 290-455 calories and 23-38g of fat per link).

This can be improved by changing up the sausage. Namely, changing out pork for a leaner meat like turkey or chicken, which have roughly half the calories and a third of the fat (140-160 calories and 7-10g of fat). One benefit is that they’re both readily available in your grocery store in a variety of flavors. You can mix it up a bit, but you’ll want to aim for a savory, mild sausage. Chorizo or a spicy sausage will overpower the rest of the dish.

Another way to lighten the dish is to bake or grill the sausage instead of cooking it on the stovetop. This ensures the sausage isn’t sitting in grease or fat like butter or oil. But keep in mind, grilling the sausage means you won’t have the sausage grease to flavor the onion gravy.

One of the simplest way to improve the calorie, fat, and salt content of your bangers and mash is to simply not add the onion gravy. While it adds a lot of flavor to the meal and ties all the ingredients together, it’s not the bangers and it’s not the mash. To replace some of the taste, you can still lightly sauté the onions and add those to the potatoes.

While gravy adds a lot of flavor to the meal and ties all the ingredients together, it’s not the bangers and it’s not the mash.

If you want the gravy (preferable), you can make it a bit healthier. Some recipes will call for butter or stock. Others call for sugar. These aren’t entirely necessary. Truly, all you need to make an onion gravy is the onions, an oil, bangers, and some way to deglaze the pan. You’re essentially making a pan sauce. By removing many of the extra ingredients, you can lighten up the gravy. It’s still not super healthy for you, but the gravy packs plenty of flavor. This will allow you to cut down on portion size.

We’ve previously written on lighter mashed potatoes, originally in Getting Creative with Comfort Food: Healthy Meatloaf and Mashed Potatoes. There are many simple ways you can lighten your mash up. Instead of butter and whole milk, you can substitute skim milk, margarine, or low-fat sour cream.

The most important thing to note is to add milk, butter/margarine, and sour cream judiciously!

The most important thing to note is to add milk, butter/margarine, and sour cream judiciously, since you can always add more, but steaming or boiling more potatoes to mash takes too long. This can also help you save on calories by cutting back on the fatty ingredients. 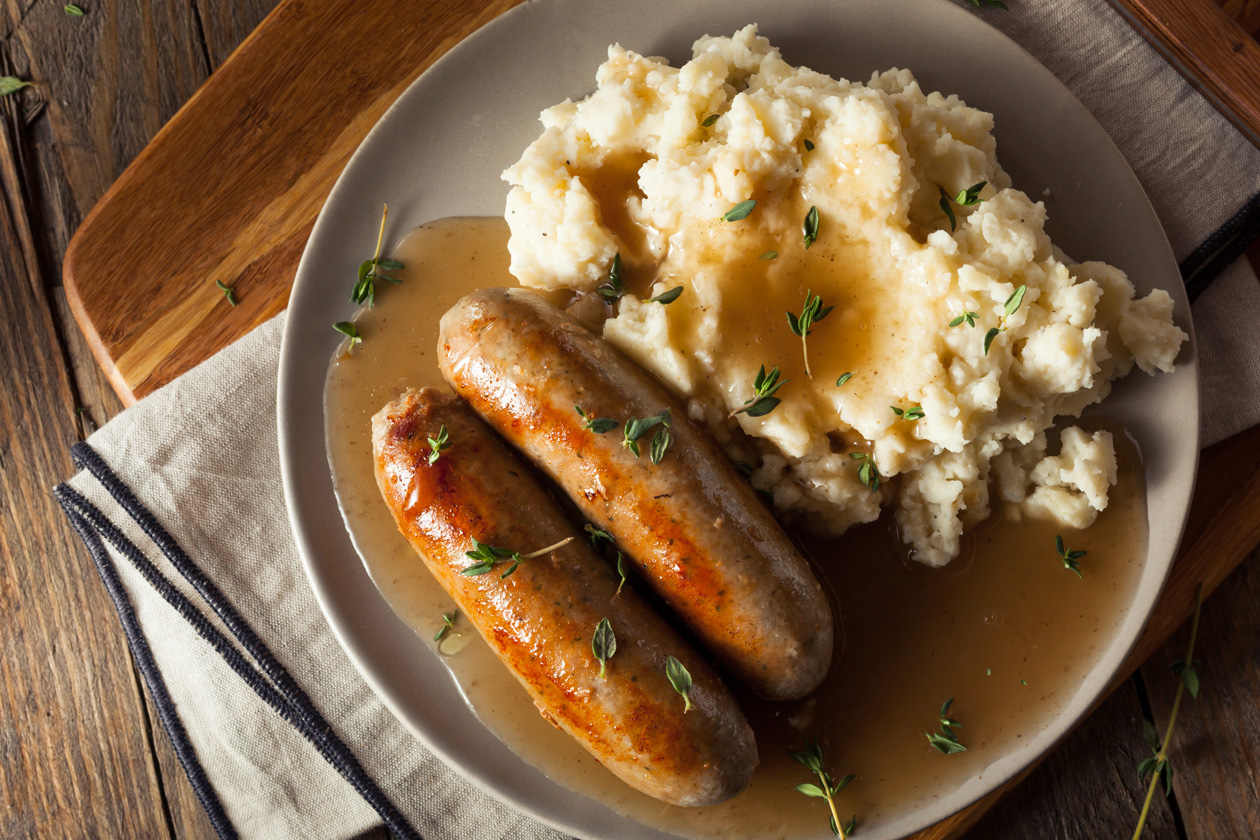 The English Breakfast Society — A Guide to British Sausages

Using Garlic in Your Cooking