You’re in the mood for a hearty Italian dinner. Something cheesy and savory, with a warmth and comfort to match its complex and balanced flavors. You turn to risotto, one of our go-to impress your friends dishes, but like any time we’ve ever made risotto, you make more than you need for that meal alone. Instead of letting that extra risotto go to waste or just reheating it in the microwave the next day, you can transform it into something amazing. Seriously, the dish we’re going to be exploring today needs to be more known, because it’s delicious!

Perfect as a snack on the go, as finger foods for a party, or as a sit down, fork and knife treat, arancini is a fried ball of cheesy goodness. Not only is it tasty, it’s fairly simple to make while creatively utilizing leftovers, preventing food waste.

The History of Arancini

Arancini has a long history that draws from the history of the region mostly connected with the dish — Sicily. The island at the toe of the boot that is Italy has changed hands between a number of empires over the years, each imparting their culture on the people who call the island home. Arancini likely traces its creation back to the time of Arab rule over the island, between the 9th and 11th centuries. At this time, saffron-seasoned rice was rolled into balls and flavored with lamb. It’s theorized that arancini may have begun looking closer to what we’re familiar with today around the 12th century, when the rice balls began to be breaded and fried. That said, there’s some debate over the origins of arancini.

There’s also a running debate over the actual name of the dish. Arancini is the plural of arancino, which translates to “a small orange.” In other areas of Sicily, they use the feminine version of the word, arancina (or pluralized as arancine). In Northern Italy, where risotto is popularized and likely closest to the arancini you may find in the United States, they call it arancini.

The Basics of an Arancini

With arancini, you can really tweak and customize the dish with numerous opportunities to add your own creative flair. Traditionally, arancini has a filling, often a shredded meat or cheese filling. Many modern interpretations of the dish are simply breaded and fried balls of risotto, relying on the fillings of the risotto to take the place of the traditional fillings. But first, you have to make the risotto. 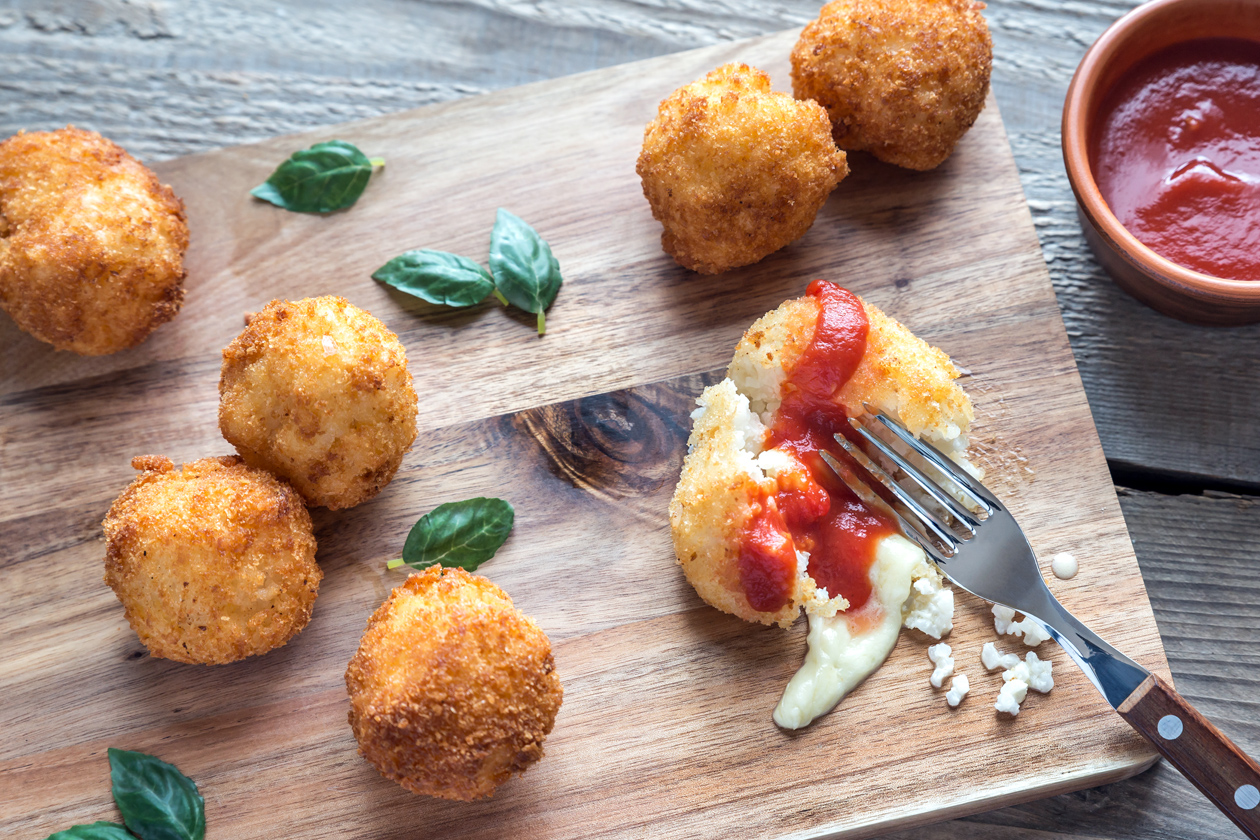 Once you’ve made the risotto, eat what you can, but you’ll want to reserve about half of it for the next night. By a rough estimate, you’ll want to save around two cups-worth of risotto. Put it in an airtight container and store it in the refrigerator overnight. The next day, you can prepare whatever filling you desire. For this recipe, we’ll be keeping it simple and using ciliegine (fresh mozzarella balls that are roughly the size of a cherry) or perlini (even small mozzarella balls). Once you’ve formed the ball, just dredge in flour, dip in beaten eggs, and cover in breadcrumbs.

When it comes to frying, you have a few choices. Traditionally, you’d fry them in a neutral oil at around 350°F until they’re crispy and brown. To make them a bit lighter in calories, you can also try an airfryer or even the oven at the same temperature. If you go one of those routes, we do suggest lightly covering the arancini with a cooking spray to help them crisp up a little.

Cooking for Beginners: Even More Techniques and Tips