Here at Medicareful Living, we’re big fans of traveling. We’ve given you tips for traveling home and abroad, shown how Medicare coverage travels with you, and even made suggestions for some excellent vacations for seniors. If you’re looking to explore this great country of ours, there are few better ways than a road trip. We’ve previously written up our own history-focused road trip of the East Coast, but one data scientist has developed his own scientifically optimal road trip.

Randy Olson, the trip’s designer, originally developed his algorithm as a fun way to find the best search strategy to find Waldo, of Where’s Waldo fame. He later was challenged by a writer from the now defunct Discovery News, Tracy Staedter, to utilize this algorithm and come up with the statistically best road trip of the United States. In the end, Olson came up with two, one that took you to 50 of the country’s major landmarks and the other that explored 47 of the most popular cities in the United States.

Article based on Randy Olson’s “Computing the optimal road trip across the U.S.”

How the Trip Was Decided

To find the most statistically perfect road trip across the United States, Olson and Staedter came up with three key rules to follow.

With these rules set, Staedter chose 50 landmarks that fit the bill. To make up for Alaska and Hawaii, she also picked two locations for California and one for Washington, D.C. Once the locations were set, it was up to Olson to find a route with the smallest amount of time in the car and one with the most enjoyable sites. By analyzing 2,450 routes, Olson utilized a genetic algorithm to come up with a final map, available here. For the technologically-attuned out there, Olson also linked to his algorithm, so you could design your own scientifically backed road trip!

The road trip accounts for 224 hours driving, or 9.33 days, that treks over 13,000 miles (13,699 to be exact). Olson suggests that you take two to three months to complete the epic journey across the continental United States. Starting at the Grand Canyon, the tour zigzags through the middle of the country, before following the East Coast north and cutting back across the country. When you look over the journey you’ll be undertaking, you can see why it’s suggested to take two or three months to explore everything!

The full list of the sites seen on the tour is in the table below. 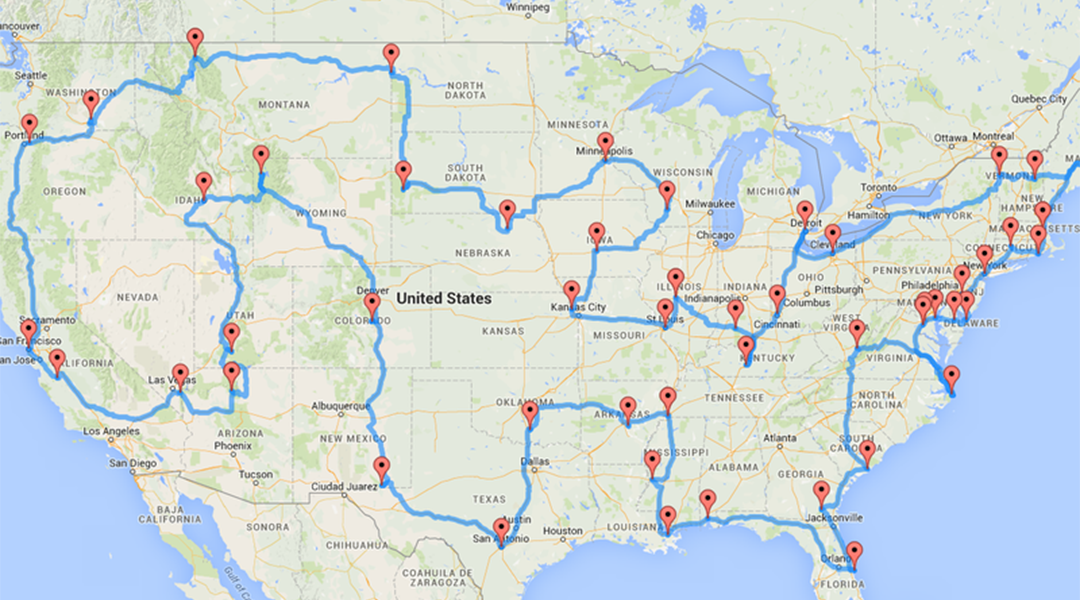 If historic sites and national landmarks aren’t your thing, Olson also designed a trip based around TripAdvisor’s top-rated cities to visit in the continental United States. The second trip follows the basic path of the landmark journey, but it’s slightly shorter (only 12,290 miles). Olson notes that Tripadvisor’s reviewers left off any cities from North Dakota, Vermont, and West Virginia, though you could certainly stop and explore them as you pass through. There’s also an extra stop in Ohio to keep the entire trip within the borders of the United States.

Since there’s so much to see in different cities and some states, like California, Texas, New York, and Pennsylvania, you may need more than the two to three months originally given for the landmark trip. See Olson’s original article for Google Maps directions.

Olson’s 47 city tour stops in the cities and states shown below. 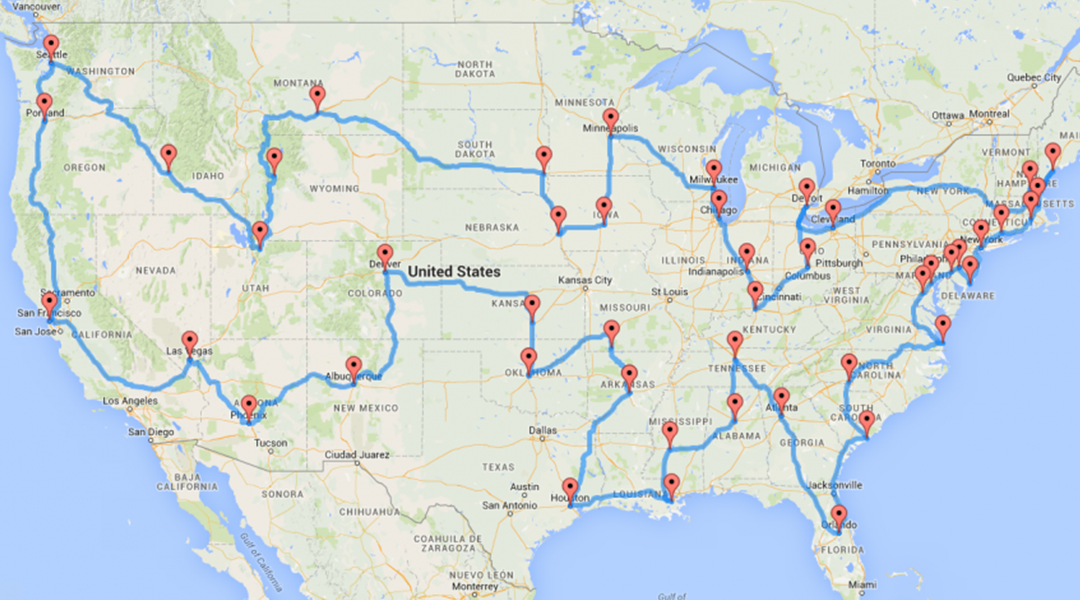 Traveling During the COVID-19 Pandemic