Of all the reasons to enroll in Medicare coverage, making health care more affordable is perhaps the biggest for millions of beneficiaries. One of the benefits found in Medicare Advantage plans is a maximum-out-of-pocket (MOOP) limit, but is there anything similar that will help with out-of-pocket costs for Medicare Part D?

What is TrOOP in Medicare?

If you have a Medicare Part D plan, you do have a special MOOP limit, called the TrOOP, short for True Out-of-Pocket limit. Each TrOOP Medicare Part D limit is there to regulate the amount of out-of-pocket costs you have through your drug plan in a year. Once you’ve reached your TrOOP Part D limit, you’ll exit the “donut hole” and enter catastrophic coverage. This means Medicare and your plan will start covering most of your out-of-pocket costs for applicable prescriptions.

While these limits are set by the Centers for Medicare & Medicaid Services (CMS), there are other ways you can save money depending on your Medicare Part D plan. These can all help you avoid reaching your TrOOP limit by keeping costs down. If this strategy interests you, check out the Medicareful Plan Finder to compare plans. 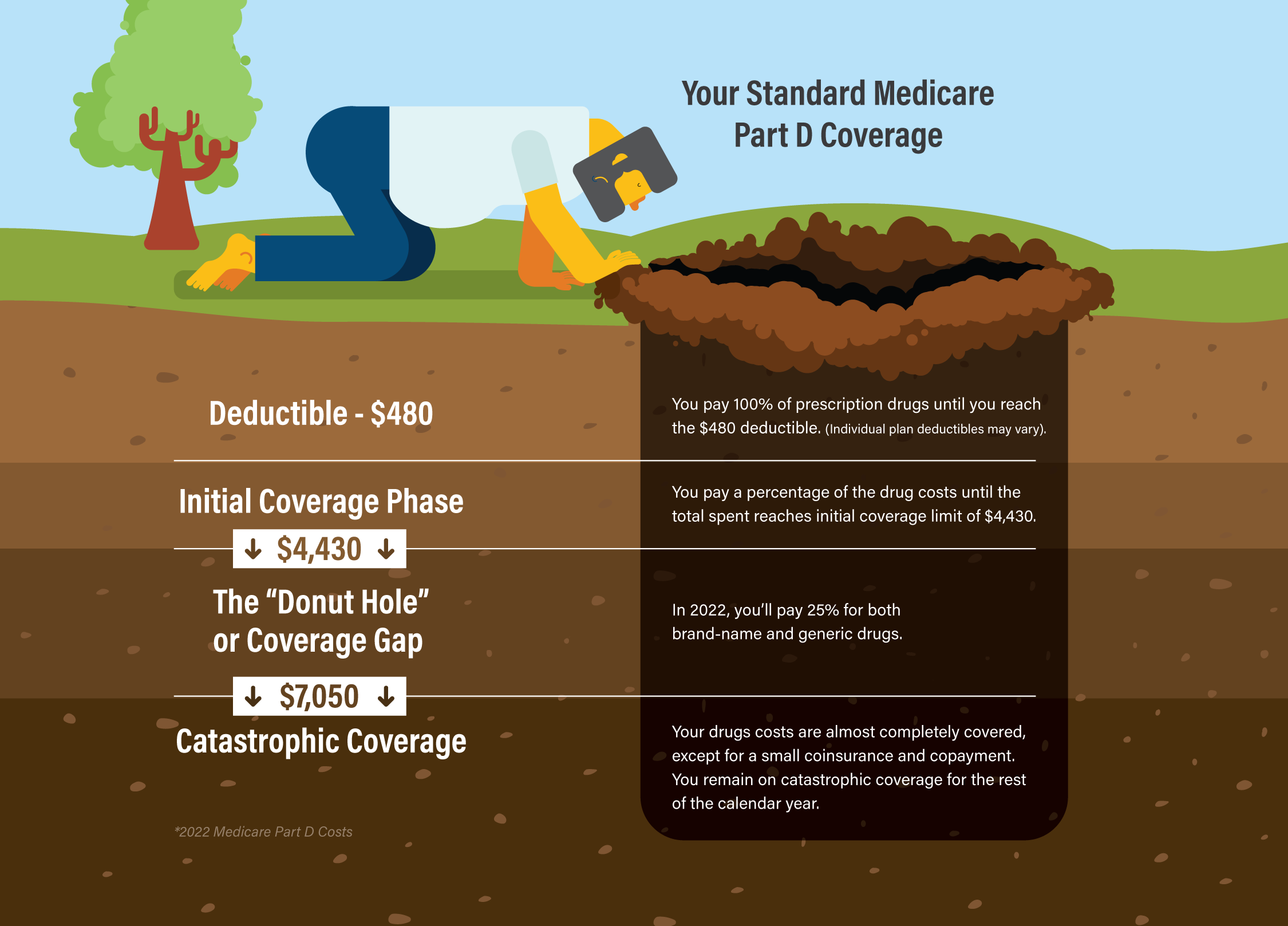 The Part D Coverage Gap, aka the Donut Hole

After meeting your plan’s deductible and initial coverage limit, but prior to reaching the TrOOP limit and catastrophic coverage, you’ll fall into the Medicare Part D coverage gap, also called the donut hole. Once your out-of-pocket costs reach the initial coverage limit — $4,430 in 2022 — your plan covers less of the costs for your prescription drugs.

Once you’ve entered the donut hole, your plan covers less of the costs for your prescription drugs.

This ends once you reach your TrOOP and enter catastrophic coverage. The specifics of what you’re expected to pay changes each year, so keep that in mind if you’re getting close to the donut hole. For 2022, you’re expected to pay 25 percent of both the brand-name and generic drug costs. Previously, you paid more for generic drug costs, but in 2020, the coverage gap “closed,” meaning it bottomed out at you paying 25 percent for both brand-name and generic drugs, the same rate as you do in your initial coverage phase.

What Counts Toward TrOOP?

Your TrOOP limit is the point when you leave the coverage gap and enter catastrophic coverage. In 2022, the Medicare TrOOP limit is $7,050. Before entering the coverage gap, there are several out-of-pocket costs that add up toward your TrOOP. The big three items that count toward TrOOP are your yearly deductible, coinsurances, and copayments. Premiums don’t count toward TrOOP, however, as well as pharmacy dispensing fees and what you pay for drugs that aren’t covered by your plan. You don’t get a credit toward exiting the donut hole for any part of retail drug costs that are paid by your Part D plan. The only costs that count are those paid by you and those paid by the drug manufacturer.

The big three items that count toward TrOOP are your yearly deductible, coinsurances, and copayments.

While in the donut hole, the costs that count toward your limit change slightly and for the better. The amount you pay counts toward the TrOOP limit, but the major difference between name-brand drugs and generic drugs is that for generic drugs, only the amount you pay counts toward your TrOOP. For name-brand drugs, the discount payment your plan makes also adds up toward your limit. So, if you’re paying 25 percent and your plan’s discount is 70 percent of the name brand drug, 95 percent of the drug’s price counts toward your TrOOP. For example, a drug costs $100, your plan’s discount payment is $70, and you pay $25. This means $95 is added to your TrOOP limit.

After the TrOOP Comes Catastrophic Coverage

It’s worth remembering that these coverage limits are set by CMS. Part D plans are able to offer lower deductibles than the federally set maximum of $480 in 2022, but all plans have the same initial coverage limit, and all enrollees have the same out-of-pocket limit. The Medicareful Plan Finder is a great way to find Part D plans in your area and compare the different coverages and costs directly.

What are Medicare Pilot Programs?