Congress passed the Inflation Reduction Act (IRA) of 2022, which is set to be signed into law today. This government reconciliation bill promises to fund environmental efforts, close tax loopholes, work to lower inflation, and reduce health care costs under Medicare. The changes this bill brings has the potential to save Medicare beneficiaries thousands of dollars annually.

Unless directly cited elsewhere, all facts and figures from the bill can be found directly in the legislative text of the Inflation Reduction Act of 2022 or the topline messages for the drug pricing reforms.

One essential drug with a new price implemented outside of the negotiations is insulin. The new bill will cap the monthly price of insulin at $35. Prior to this, the cost of insulin ranged from $45 to $1,000 each month. This provision was originally going to cover non-Medicare private insurance plans as well, but was rejected by the Senate parliamentarian. It was even put up for a separate vote to challenge this ruling, but didn’t receive the necessary 60 votes to be included in the final bill. This provision did still pass for Medicare plans, however.

A similar fate was shared by another provision of the IRA, which sought to tie drug price increases to inflation by instituting an inflation rebate. This means that drug companies would pay Medicare the difference of any price increase above the inflation rate for that year. Like the insulin price cap, this was going to cover non-Medicare private insurance plans too, but that portion didn’t pass muster with the parliamentarian and didn’t receive enough votes after that.

All Vaccines Covered Under Medicare

The Inflation Reduction Act of 2022 will also open the possibility of preventive vaccinations to be covered under Medicare. Currently, Medicare covers vaccines for COVID-19, the annual flu, and pneumonia, while vaccines for Hepatitis A and B or shingles are only covered in certain circumstances or by Medicare Part D. But now all vaccines will be zero cost.

Perhaps the most significant change of all is the new cap on out-of-pocket drug costs for Medicare beneficiaries. As of now, Medicare Part D plans have a True Out-of-Pocket (TrOOP) limit that changes each year. For example, in 2022, the TrOOP limit is $7,050.

As a result of the IRA, the out-of-pocket limit for Part D costs will be set at $2,000 starting in 2025, or over $5,000 less than it previously had been. Before the IRA, reaching the TrOOP still included a small five percent coinsurance for services that beneficiaries are responsible for. This coinsurance will be phased out in 2024. Beneficiaries will also have the option to break their out-of-pocket costs into affordable monthly payments. In 2020, around 1.4 million Medicare Part D enrollees had out-of-pocket costs of $2,000 or more.

There were two other major changes and effects on Medicare Part D from the Inflation Reduction Act. First, the IRA is capping the annual growth of Medicare Part D premiums to six percent between 2024 and 2030. Furthermore, the IRA will be expanding access to the Part D Low-Income Subsidy by eliminating the partial subsidy level. This will allow anyone making 150 percent of the Federal Poverty Level to utilize this subsidy and lower their out-of-pocket costs even more.

You can read more about the timeline when each facet of the IRA will come into effect below (graphic courtesy of the Kaiser Family Foundation). 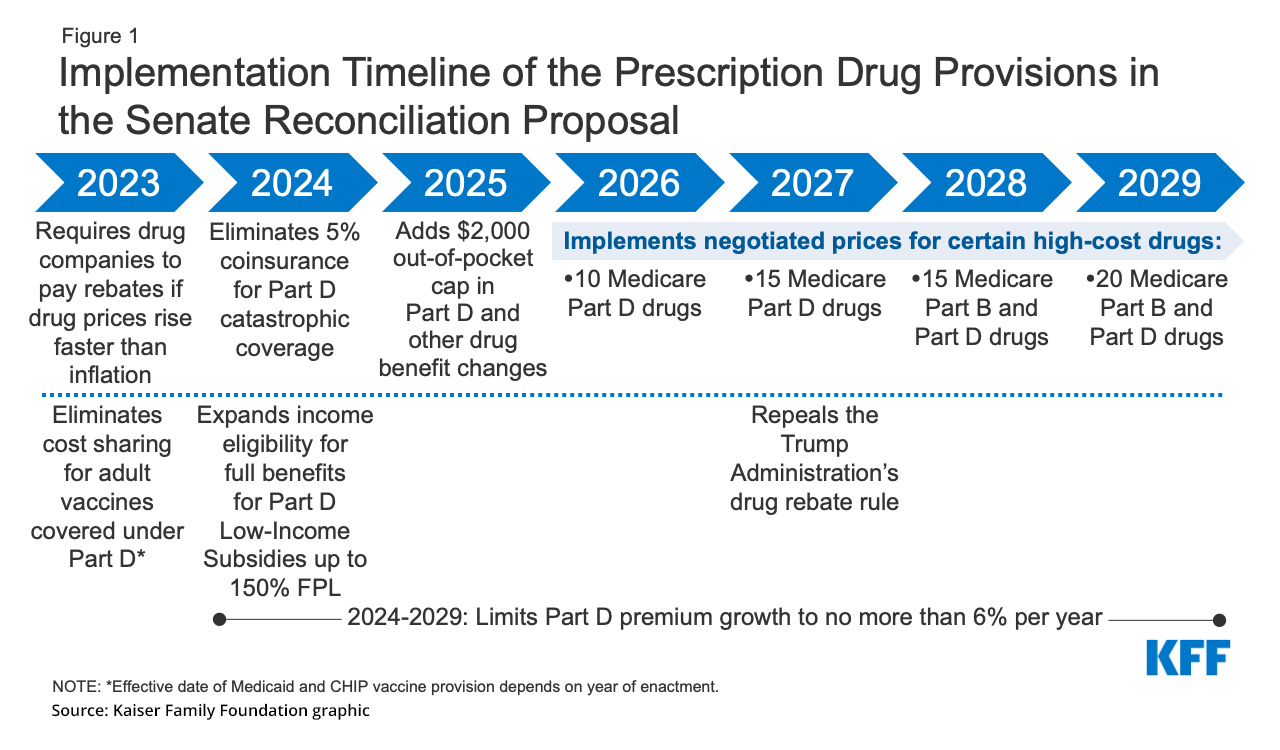 We encourage you to read into the other areas that the Inflation Reduction Act of 2022 touches. Not only is it the largest climate investment in U.S. history, it could mean lower out-of-pocket costs for Medicare beneficiaries moving forward!

Here's What Medicare Costs in 2023